The State of ScratchPad 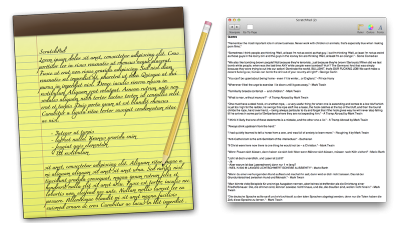 Since it’s been a few months since I wrote my last progress update on ScratchPad 2.0, I thought I would write a bit about where the development of the new version currently stands.

Although ScratchPad isn’t a particularly complex program, rewriting the whole thing from the ground up is still a time-consuming process. Unfortunately, it was absolutely necessary because I didn’t really know what I was doing when I first started ScratchPad. I started it on Mac OS X 10.4 (Tiger) and there have also been a lot of advancements in terms of built-in technologies to OS X that I wanted to take advantage of. The easiest way was to just rewrite the code rather than try to bend the old code to fit the new technologies.

According to GitHub, the last time I worked on ScratchPad 2.0 was in March, so a little over a month ago. I am continuing to work on it in between the other things that eat up my time as I would really like to finish it as soon as possible. Not only is version 1.x ugly in Yosemite and not Retina-compatible, it is also unstable and I have had a lot of complaints about people losing notes. These are things that I want fixed sooner rather than later. I will continue to work on it when I can and promise to finish as soon as I possibly can.

The easiest way to keep track of ScratchPad 2.0’s development progress is to watch out for commits on the GitHub page.